APRIL 15, 2020 – As the 25th anniversary of the Alfred P. Murrah Federal Building bombing approaches, EMSA unveiled a new ambulance designed to honor the victims and survivors of the bombing as well as pay tribute to the EMSA medics who responded to the tragedy in Oklahoma City on April 19, 1995. 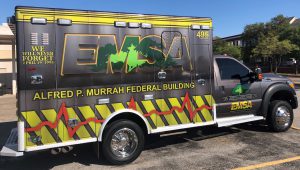 This ambulance has several features that pay tribute to the Memorial. The unit’s color scheme is inspired by the 9:01 and 9:03 Memorial gates, and those timestamps are marked on the front and back of the ambulance. Also, the Oklahoma City National Memorial and Museum Survivor Tree logo is within the EMSA logo that stretches along both sides of the ambulance, symbolizing that the bombing and Memorial will always be a part of EMSA among other icons on the new truck.

“The Oklahoma City Memorial ambulance is a symbol of EMSA’s commitment to the Oklahoma City community, which we have served since 1990. During these challenging times, we hope the ambulance can remind people of the hope, resilience, and strength of not just Oklahoma City, but our entire state,” Winham said.

The new unit is numbered 495, to represent that this ambulance is for the survivors, victims, and EMSA Team Members who responded to the Alfred P. Murrah Federal Building in 1995. The new ambulance joined EMSA’s fleet in the Western Division at the conclusion of the unveiling and is now on the streets of Oklahoma City responding to emergency calls.

EMSA business offices are currently closed due to COVID. If you have a medical emergency, please call 9-1-1.