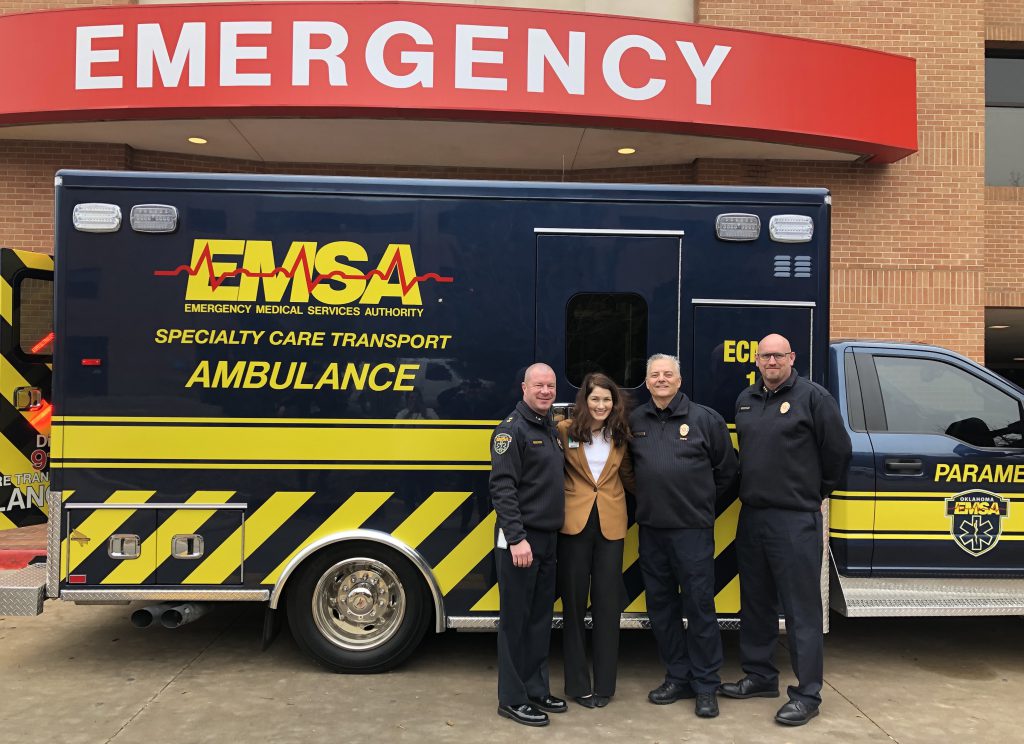 February 17, 2020 – EMSA and INTEGRIS Health unveiled a partnership that saw the debut of a one-of-a-kind specialty care transport ambulance – ECMO 1 on Monday.

“We have been in collaboration (with INTEGRIS) for almost a year, getting this right,” EMSA President and CEO Jim Winham said.

ECMO provides support to patients whose heart or lungs are so severely diseased or damaged that they can no longer serve their function; perhaps after a heart attack or lung-related issues such as flu or pneumonia. The goal is to allow the heart or lungs to rest and recover while the machine does all the work. When the heart or the lungs have healed and can work on their own, the lifesaving support of the ECMO artificial heart/lung machine is weaned then removed.

“I’ve been working with both organizations for several years now, and it’s just so exciting that they are moving patient care forward for the state of Oklahoma together,” Allison Petersen, Integris Executive Vice President and General Counsel as well as an EMSA Trustee said.

Previously only done in a hospital setting, technological advances have allowed ECMO to move into ambulances. Together with EMSA, the INTEGRIS ECMO team stands ready to be there anytime, anywhere, for anyone in need of this life-saving care.

“(The) ECMO program is a complex program, and it requires a lot of expertise,” Dr. Aly El Banayosy, Executive Medical Director for Acute Circulatory Support and Specialty Critical Care INTEGRIS Baptist Medical Center said, “Such infrastructure is not easy to build.”

EMSA medics in conjunction with the INTEGRIS Critical Care ECMO team provides the highest level of complex care in the state. Outside of ECMO transfers, the EMSA and INTEGRIS teams have the capability of transporting patients who require advanced management of ventilator support, IV medications, and cardiac assist devices including intraaortic balloons pumps, impella devices, and LVAD pumps. The expertise of this team allows for safe inter-hospital transfers so patients can receive the one-of-a-kind care.

“This vehicle is not the same as the one you see in the 911 system every day. It has more room in the back,” Winham said while noting the ECMO ambulance is a bit taller and two feet wider. “It also has five distinct seats with safety belts in the back.”

EMSA’s ECMO unit specifications were designed in collaboration with the INTEGRIS Health ECMO Team. Special attention was paid to the layout of the ambulance to make sure the patient could receive the critical clinical care needed, could comfortably and safely transport up to five ECMO Team Members in addition to the patient during long distance transports.  Additionally, the larger ambulance also has the capacity to carry more oxygen and other medical gasses that are needed for ECMO patients.

Initially, 60 ECMO annual transports were projected for this new EMSA unit, however new data shows the need for the clinical care provided by the ECMO unit has projections approaching 100 transports per year. When not assigned to ECMO transports, this unit will serve as one of EMSA’s bariatric ambulances for the Oklahoma City area ensuring this unit is able to serve several key roles in the EMSA system. This is just the beginning for the ECMO program at EMSA; while ECMO 1 will be stationed in EMSA’s Western Division, ECMO 2 will deployed soon to serve patients in EMSA Eastern Division.

EMSA business offices are currently closed due to COVID. If you have a medical emergency, please call 9-1-1.